A widget that marks its child as being a candidate for hero animations.

When a PageRoute is pushed or popped with the Navigator, the entire screen's content is replaced. An old route disappears and a new route appears. If there's a common visual feature on both routes then it can be helpful for orienting the user for the feature to physically move from one page to the other during the routes' transition. Such an animation is called a hero animation. The hero widgets "fly" in the Navigator's overlay during the transition and while they're in-flight they're, by default, not shown in their original locations in the old and new routes.

To label a widget as such a feature, wrap it in a Hero widget. When navigation happens, the Hero widgets on each route are identified by the HeroController. For each pair of Hero widgets that have the same tag, a hero animation is triggered.

If a Hero is already in flight when navigation occurs, its flight animation will be redirected to its new destination. The widget shown in-flight during the transition is, by default, the destination route's Hero's child.

For a Hero animation to trigger, the Hero has to exist on the very first frame of the new page's animation.

Routes must not contain more than one Hero for each tag.

This sample shows a Hero used within a ListTile.

Tapping on the Hero-wrapped rectangle triggers a hero animation as a new MaterialPageRoute is pushed. Both the size and location of the rectangle animates.

Both widgets use the same Hero.tag.

The Hero widget uses the matching tags to identify and execute this animation.

Heroes and the Navigator's Overlay Stack must be axis-aligned for all this to work. The top left and bottom right coordinates of each animated Hero will be converted to global coordinates and then from there converted to that Stack's coordinate space, and the entire Hero subtree will, for the duration of the animation, be lifted out of its original place, and positioned on that stack. If the Hero isn't axis aligned, this is going to fail in a rather ugly fashion. Don't rotate your heroes!

To make the animations look good, it's critical that the widget tree for the hero in both locations be essentially identical. The widget of the target is, by default, used to do the transition: when going from route A to route B, route B's hero's widget is placed over route A's hero's widget. Additionally, if the Hero subtree changes appearance based on an InheritedWidget (such as MediaQuery or Theme), then the hero animation may have discontinuity at the start or the end of the animation because route A and route B provides different such InheritedWidgets. Consider providing a custom flightShuttleBuilder to ensure smooth transitions. The default flightShuttleBuilder interpolates MediaQuery's paddings. If your Hero widget uses custom InheritedWidgets and displays a discontinuity in the animation, try to provide custom in-flight transition using flightShuttleBuilder.

By default, both route A and route B's heroes are hidden while the transitioning widget is animating in-flight above the 2 routes. placeholderBuilder can be used to show a custom widget in their place instead once the transition has taken flight.

Parts of a Hero Transition 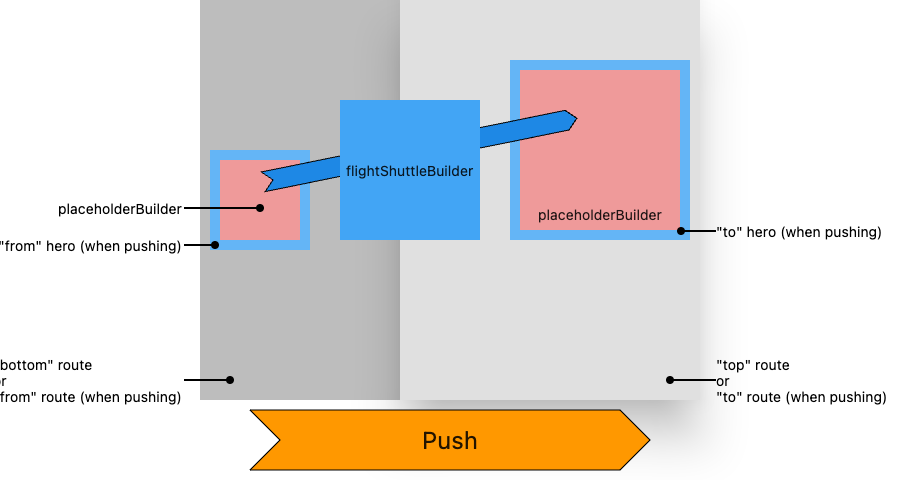 child → Widget
The widget subtree that will "fly" from one route to another during a Navigator push or pop transition.
final
createRectTween → CreateRectTween?
Defines how the destination hero's bounds change as it flies from the starting route to the destination route.
final
flightShuttleBuilder → HeroFlightShuttleBuilder?
Optional override to supply a widget that's shown during the hero's flight.
final
hashCode → int
The hash code for this object.
read-onlyinherited
key → Key?
Controls how one widget replaces another widget in the tree.
finalinherited
placeholderBuilder → HeroPlaceholderBuilder?
Placeholder widget left in place as the Hero's child once the flight takes off.
final
runtimeType → Type
A representation of the runtime type of the object.
read-onlyinherited
tag → Object
The identifier for this particular hero. If the tag of this hero matches the tag of a hero on a PageRoute that we're navigating to or from, then a hero animation will be triggered.
final
transitionOnUserGestures → bool
Whether to perform the hero transition if the PageRoute transition was triggered by a user gesture, such as a back swipe on iOS.
final